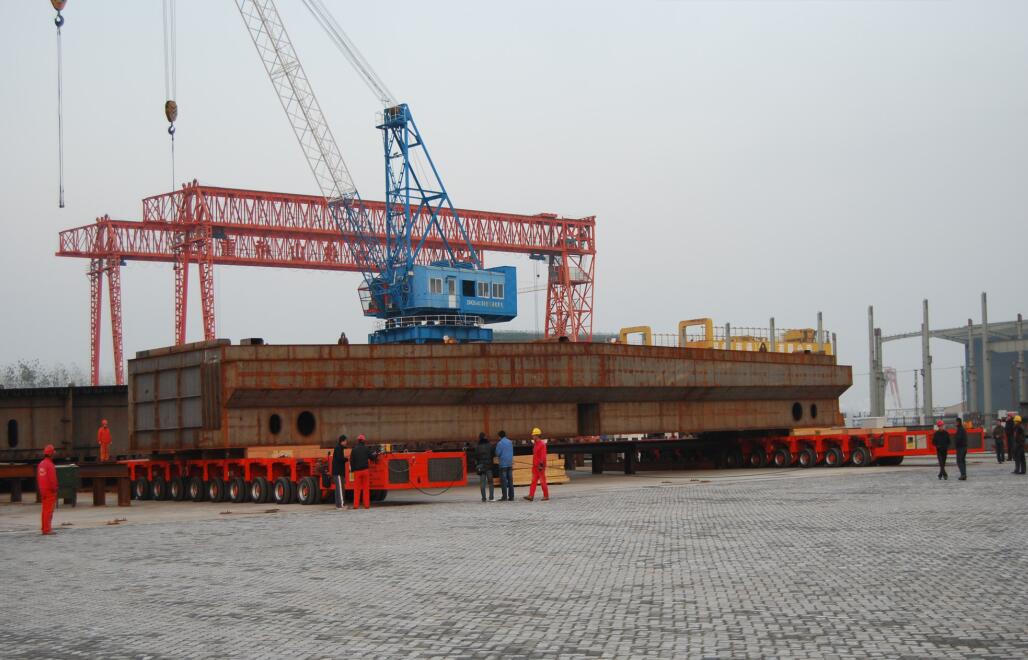 Is it possible to replace a bridge on an interstate highway in just 22 minutes? You know that bridge sections are extremely heavy and bulky.

Concrete bridges weight thousands of tons and need a heavy transport vehicle to move them in place. Constructing and replacing bridges fast is important to state authority because it interferes with the flow of traffic.

Heavy lift equipment and vehicles are required to remove the old bridge sections and bring new sections. The most convenient and effective to carry heavy construction materials is SPMT transport.

Self-propelled modular transporters can carry the heaviest bridge sections. In this article, you will learn the difference between the old and new methods of transporting bridges. You will also learn how SPMTs work.

In the past, construction companies did not have a way of transporting large bridge sections. Hence, most the bridges were constructed on the site.

On-site construction means that the highway section that needs a new bridge could be closed. Sometimes it would take months to replace a bridge because all the concrete blocks have to be prepared on the site.

The companies would then require heavy equipment to lift the bridge sections to the right place. The closed road sections would cause traffic congestion.

Road users would be affected and would have a bad attitude towards state authorities. In addition, construction companies had no way of controlling their environment.

The engineers had to work with the existing features in the environment. Sometimes the construction site had to be established near rivers.

Today, engineer and contractors do not have to fabricate all sections on-site. Instead, bridge sections are prefabricated in one location. The road users continue to use the highway as the sections are prepared.

When all the sections are ready for installation, SPMTs are used to move them one or two at a time. The process takes a shorter time compared to the old method. State authorities win the favor of the public when bridges are constructed fast.

One of the additional benefits of using SPMTs in bridge construction is that the company has control over the environment. The company can create the best environment to build components fast.

In addition, the company can minimize damages to the external environment. When bridge components are casted off site, companies can save on materials. Hence, the overall cost of the project is reduced.

Another benefit is that construction companies can apply longer curing times when preparing concrete components. Consequently, the bridges can withstand higher pressure because the concrete blocks are sturdy.

Prefabrication of concrete blocks improves the safety of road users as well.

Self-propelled modular transporters were first used to construct a bridge in the US in 2006. The bridge was located the Volusia County in Florida.

The Florida Department of Transportation formed a construction team. The team’s task was to replace the Graves Avenue Bridge. The team used SPMTs to move the old bridge and move it to Interstate in just 22 minutes.

So, it is possible for any other county government to lift and move a bridge in 22 minutes. Instead of the one bridge that existed over the interstate, two concrete blocks were placed alongside each other.

Each concrete block was 143 feet long. Consequently, there was no need for traffic disruptions or closing roads.

The new bridges weighed about 1300 tons and were move from the construction site using SPMTs. The accelerated bridge construction saved road users about four months of road closure.

Traffic was only affected for two weekend nights. SPMTs were also used in constructing a twin bridge at the Pioneer Crossing Interchange in Utah. The project was completed in 2010.

The bridge had two spans of 2300 tons each. Because of the twin design, bridge remained in use during the construction. The spans were the heaviest bridge sections to be carried by SPMTs.

Each span required 20 axles for support, which was a total of 320 wheels per axle.

The two spans in Utah were set in different times to allow normal traffic flow. One was set in 2009 and the other in 2010. SPMTs were also used to construct Rawson Avenue Bridge in 2013 in Oak Creek.

The bridge was constructed on the sides of the highway. SPMTs were then used to move the concrete blocks into place. The highway was only closed for 12 hours as the spans were being set.

The Rawson Avenue Bridge had two spans and was 188 feet long. The first weighed 1545 tons while the second weighed 1345 tons.

Each span required two lines of SPMTs and each line has 6 SPMTs that were connected from end to end. Each of the SPMT had 6 axles that had 4 wheels.

SPMTs consists or 4 or 6 axle lines. Each axle line can hold between 36 and48 tons. Wheels can move around in 360 degrees to allow the trailer to move in any direction.

Some SPMTs are controlled by a hand-held device while some are controlled by computer programs. The transporters have power pack units that supply power to the hydraulic drive system.The system controls the steering, braking, and axle height.

A computerized steering program controls each axle independently. Hence, SPMTs can move in a pre-set or pre-programs mode. Alternatively, the axle lines can be controlled manually with a control panel or computer program.

Several trailers can be combined to handle the weight and dimensions of the cargo. The trailers move as one unit by their axle lines can be steered independently.

SPMTs have 3 or 4 hydraulic fields that control the hydraulic pressures in each axle line. Hence, the axle lines can move up and down independently when they are obstacles on the road.

Consequently, the platform remains flat and the cargo in position as trailers move along different terrains.

In the past, construction of bridges was done on the site. The highway would be closed for months and traffic diverted to other roads. This caused much congestion until the bridge was completed.

Today, state authorities can replace a bridge with a new bridge in just 22 minutes. The concrete components are prepared in a different location when the old bridge is still in use.

When the bridge spans are ready, SPMTs are used to transport them to the site. The highway is closed for just a few hours to allow all the bridge sections to be transported.