How SPMT Work to Transport Thousands of Tons of Equipment

Manufacturers depend on their equipment to produce high quality products. Technology is everything in the manufacturing business.

Unfortunately, the best equipment is in most cases bulky and very heavy. Companies desire to invest in the best production technology but transporting it is a major problem.

For instance, if you buy 5, 000 ton equipment, how do you transport it to your premises? You cannot move it with normal trucks and some semi-trailers cannot handle it as well.

You need a heavy transport vehicle to carry such a heavy load. Your best move would be to buy or hire a self propelled modular transporter.

Why? You need a perfect solution to avoid damaging your equipment. Read on for more information on how self-propelled modular transporters (SPMTs) work.

A standard self propelled modular trailer has axles across and along. The axles are computer-controlled and placed side by side to form an axle line.

The capacity of the SPMTs varies with the brand and structure. 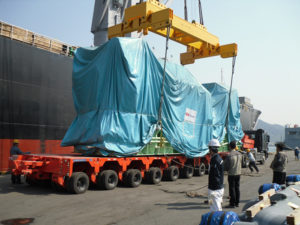 They are specifically designed for heavy haulage transport. Some have a few axle lines while the largest modular transporters can have close to 300 axle lines.

The capacity of SPMTs enables to carry the heaviest loads in the world. Hence, if you want to transport 5,000 tons equipment, the best carrier is a self-propelled modular trailer.

If you want to transport such heavy equipment one time, you can hire a modular trailer.

The large SPMTs can easily carry it. Some have capacities to carry up to 10,000 tons. If you transport such heavy equipment many times, you can buy one of these large modular trailers.

Companies that produce and sell heavy equipment should invest in SPMTs. The secret is to buy one from the leading manufacturer. Top manufacturers sell high-quality SPMTs with different capacities and a long lifespan.

One way to know if SPMTs are your best choice to carry heavy equipment is to consider the type of equipment they carry. If they can be used to transport other heavier materials, they can easily carry 5,000 tons of equipment.

The carriers are used in different fields because they are versatile and reliable. Keep reading to learn other huge loads that SPMTs can transport. 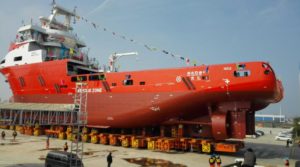 Think about the massive ships that transport people and goods across the sea. Some of those ships are used to transport different equipment and vehicles.

How do those ships move from their assembly halls to the sea?

SPMTs are used to move such ships to their place of use. The ships weigh thousands of tons.

The modular trailers used to move ships from the shipyard vary depending on the weight of the ship. The largest ships require SPMTs with more than 200 axle lines.

Sometimes axles are placed side by side to carry wide and long ship sections.

Large girders and bridge segments are placed on the modular transporters from the construction sites. Some the of the self propelled modular trailers are connected to robotic arms that look like cranes. 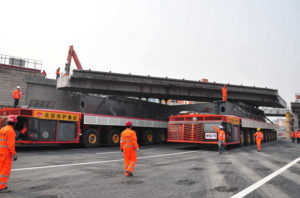 The robotic arms will move the large girder and bridge sections from the trailer to the section of the road under construction. You may not find SPMTs on small construction sites but on constructions for large structures.

Some of the concrete beams cannot be transported with semi-trailers. SPMTs are also used to transport construction equipment and materials.

Construction companies have projects in different locations. They use the carriers to shift their equipment and materials when one project is complete to the next project.

Many countries invest in wind energy to conserve the environment and natural resources. However, tapping the wind to produce enough energy that can be transmitted requires very large equipment.

You are likely to find the equipment up in the mountains or hills where the wind is strongest. The companies involved in tapping wind energy use SPMTs to transport their equipment to those locations. 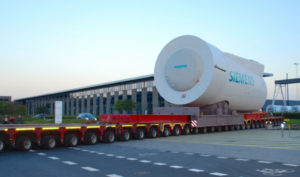 The wheels can navigate the roads to those regions. The axles in SPMTs are controlled in a way that the trailer remains balanced even on hilly terrains.

If companies can rely on these carriers in such remote places, the carriers can transport any heavy equipment in your business.

Companies in the chemical industry rely on SPMTs to transport chemical tanks. The tanks are bulky and very heavy when full. Moving them with the standard semi-trailers and trucks is impossible. 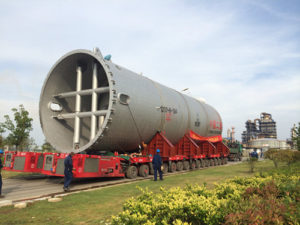 Chemical tanks require a safe mode of transport as well. A minor accident like a collision with another vehicle can be fatal. Hence, the chemical industry uses SPMTs to transport chemicals for safety reasons.

The modular trailers used in the chemical industry have different sizes because the tanks are in different sizes. You will come across SPMTs near companies that produce industrial chemicals in large number.

Have you ever visited a power station? The technology through which power is generated and distributed is amazing.

Power companies rely on large transformers to ensure that all buildings in a whole region get power. The electrical transformers are usually very heavy. How do those huge electronics get to the power stations? 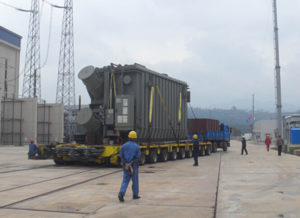 Most power stations are located far away from their assembly halls. Each station may have several transformers and each weighs thousands of tons.

Transformers are made of heavy metals because they are built to last for a long time. Power companies use SPMTs to transport the transformer safely to power stations.

In addition, some transporters require supporting metallic beams. Modular trailers are used to transport such beams, which weigh thousands of tons. 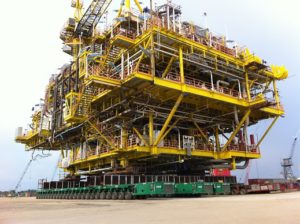 The industry uses large metallic structures that cannot be transported in any other way. Given the size of offshore structures, the largest SPMTs are used in their transportation.

Such trailers have dozens of axle lines to support the heavy weight. Sometimes the several modular trailers are connected side-by-side and head-to-tail to transport one off-shore structure.

The platforms on the trailers are made of heavy steel that can withstand pressure from the large structures. The weight of the equipment you intend to transport in your business may be anywhere near the weight of these off-shore structures.

Making a decision on the type of carrier to use to carry 5, 000 tons of equipment is now easy. Self-propelled modular trailers are the best because they have the capacity to carry any type of load.

It is unlikely that your business will deal with any load or equipment that these carriers cannot handle. SPMTs are designed to handle the largest loads in the world.

The capacities and durability depend on the brand you choose for your business. It is advisable to choose carriers from top manufacturers.

Buying or hiring a heavy hauler is expensive. Hence, you want to be sure you get the best quality in the market. If you have doubts about their capacity, think of the fields where SPMTs are used.

The wind, construction, mining, and aerospace industries handle the heaviest cargo in the world.